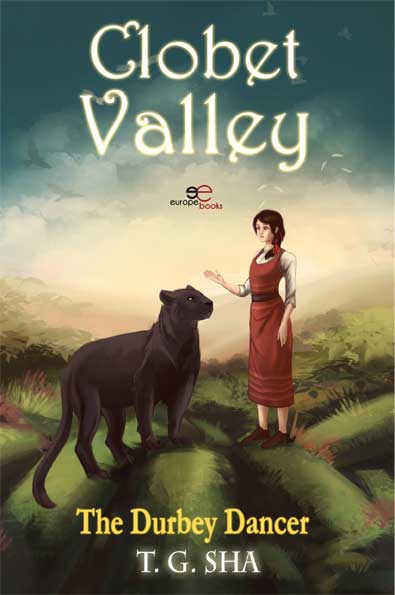 «Floza was different; she often dreamt of a world far away from the grassy mountains, a place where people wore hats and spoke in high tones. Life was ordinary for her at Clobet and she wanted more, yet the valley was so peaceful».

Floza, a mischievous fifteen-year-old girl, finds herself in an encounter with a talking panther. Her father falls ill and the one and only cure is presented by the animal. She has to travel away from her utopian life to a faraway City which is modern and high-tech. She is lured into a world of technology and contractual agreements, with a hint of science and magic. When she meets the richest man in Durbey, the secrets of her father’s past begin to unravel.

T.G. SHA, 32 years of age, born and live in South Africa. Clobet Valley. The Durbey Dancer is her first book and she is currently working on the second book in the Clobet Valley Trilogy called the Workforce Apocalypse. She is also working on middle grade novels and has produced a Clobet Valley Game called the War of Science. The game is based on the characters from Clobet Valley and the character progresses in stages according to the story line. She has discovered the love for writing when she was fifteen years old, she enjoyed writing songs and poems, before her interest in writing books. She studied a Bachelor of Commerce Honors in Industrial Psychology and she is currently a Human Resources Manager for a Swiss Chemical Company.